It’s been a joy to convene the first symposium about #Ecosexuality hosted in an academic institution which is located in the region I’ve elected as my third Matria, the Caribbean.

Day One was Thursday, January 28, and we were in the Teatro Figueroa Chapel, a beautiful amphitheater at the University of Puerto Rico, Mayaguez, whose air conditioning system needs urgent refurbishing for calibration and sustainability.  It was FREEZING!  Despite the balmy temperatures and caressing breezes of the dry season in the blessed region of the Islas Maravillas, we had to wear coats and sweaters to resist the low temperature air conditioning.  The university contributed performance spaces and technical skills, with Dean Gilbes’s special blessing.  Speakers donated their time, travel funds, and expertise.  Volunteers donated their organizational skills.  My non-profit, 3WayKiss funded the necessary hospitality and publicity. 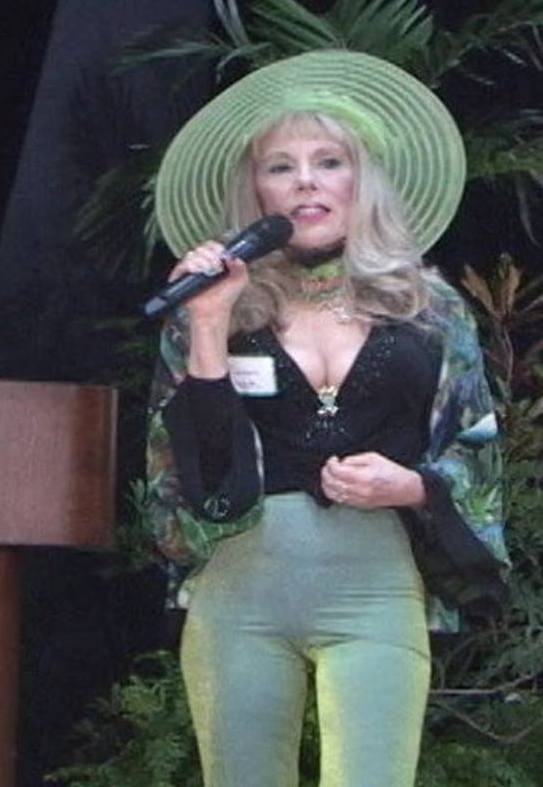 s was a day of ideas.  A little too cerebral, considering the excessive air conditioning.  The really hot gift that made it all worth while is Dr. Susan Block, who came with her husband, Captain Max, all the way from Los Angeles to educate people in our region about the inspiring behaviors of our kissing cousins from the primate kingdom, the Bonobos.  Also known as Dr. Suzy, Susan Block is a renown sexologist and sex educator who devoted her energies to studying these gentle creatures who evolve peace through pleasure.  Students had been lining up in the Lobby to sign attendance sheets.  I rushed them in so as to start on time.

The theater was full.  Our speaker was absolutely charming.  She spoke ad lib presenting her 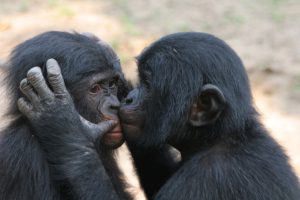 findings on a background of eloquent videos where the diverse amorous behaviors of various Bonobo communities could be admired.  These include kissing on the mouth, intercourse while gazing into a partner’s eyes, various styles of pleasure, inclusive sexual play with partners of various genders, respect for the wisdom and experience of older females, and solidarity among “sisters” when annoyed by male insistence.

What a nice place to be!  I want to sign up for Bonobo camp next summer.  I’ve been called 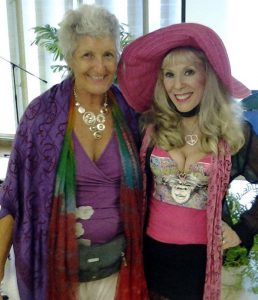 bonoboesque before.  But I bet I can learn a lot more too.  Dr. Suzy eloquently explained how, if inspired by Bonobos, we humans could find ways to use our intelligence more efficiently than we do today.  We too could evolve peace through pleasure instead of endangering terrestrial life with our cruel weapons.  Yes, I agree!  That’s ecosexual intelligence, or ESQ, right, Dr. Suzy?  And I’m so happy that the public could feel validation for these practices and ideas.  A whole batch of student reports was due this week.  Dr. Suzy’s keynote was a big hit.  Some students felt an alignment with their own way of thinking.  Others were exposed to entirely new ideas.  Many responded with enthusiasm.  Others considered Dr. Suzy’s proposal seriously.  All response were equally significant.  Some of these reports will appear on this blog in an upcoming series.  Stay tuned!

Lunchtime was a great occasion for community members, students, and volunteers to intermingle with speakers.  Tables were organized with attendance sheets, books, and foods.  We served Sancocho, a specialty of the Caribbean that brings out the richness of local ingredients.  It was made with love by our volunteers.  This tasty soup is healthy and complete, revealing the ancient culinary wisdom of the region.  Dr. Suzy was so eager to answer questions about her book we had to remind her to eat her soup.  People’s ecosystem absorbed the love found in the food.

The day continued with two favorite presentations.  Marsha Scarbrough, from New Mexico, focused on the Orishas, these African deities that reside in elements of nature and remind us to sacralize what sustains our lives.  An onstage dance made it all more real.  Another favorite was the self-revealing tale of Maria Virginia Sanchez Cintron. a bilingual world 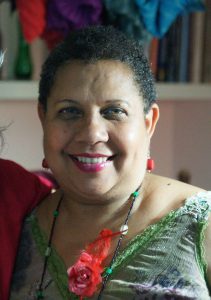 traveler, social worker, and musician in Mayaguez.  She revealed how ecosexual love can work for people seeking openness in relationships, and especially for Latino women who experience sexual expression on a continuum.  This presentation was a favorite with attendees.  It was very spontaneous and reached to the heart of many bicultural people’s experience in our region.

As the program unfolded, an audience formed that continued attendance, well beyond any required hours, which is what makes symposia real.  It was great to see such diversity in attendees: ages, colors, attires, genders, origins, disciplines, interests.  It was a true manifestation of the motley nature of the Caribbean.  Speakers had been asked to be cognizant of bilingual needs, and to leave 25 percent of their time for open questions.  It was a great joy to me to notice that we always had more questions form students and other attendees than speakers had time to address.  Participation was eager and real!

Next was my presentation from my brave co-editing experiences.  As some of you know, I 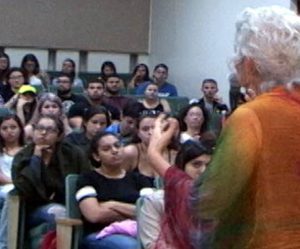 am the co-editor of #Ecosexuality: When Nature Inspires the Arts of Love, published by 3WayKiss in 2015 here in Puerto Rico.  I wanted to share about the complexity of this collaborative experience, where I worked elbow to elbow on a par with with a number of people spread world wide and all willing to go on record as ecosexual authors.  What a great adventure it was!  And a major joy in it was the evolution of a loving collaborative alliance with my faithful co-editor and mentee Lindsay Hagamen.  She appeared long distance from her community in Washington State.  This was a technological feat.  It all worked really smoothly thanks to the careful technical assistance of Antonio Ramos and Pepe Garcia.  I did not perform to the best of my abilities.  I was a bit too overwhelmed with production and emceeing responsibilities.   But it was great to read poems by Yemisi Ilesanmi and Kamala Devi, and excerpts from the book, along with Susan Block and Lindsay. 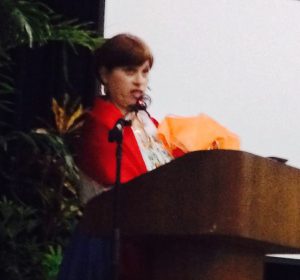 uez is the brave colleague who became involved in the project from the beginning.  A graduate of the UCLA 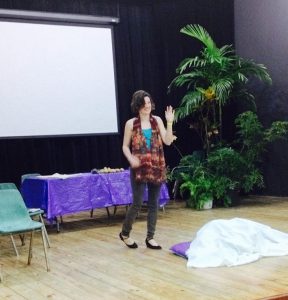 School of Film, she staged a scene from her film script Children from the Sea.  It was exciting to see the stage filled with props and performers in this in-progress staged reading.  While listening to Linda and watching the stage business, one could really understand the secrets of script writing techniques.  People could really relate to her theme and their questions were very interesting. 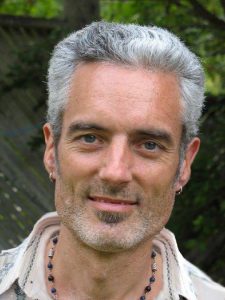 theme Spirituality in the 21st Century.  In half one hour this Master Trainer from Oakland, California, got everyone to speak out and loud about their most hidden secrets.  His simple sentence: “I pretend to . . . . but I really . . . ” worked its magic as people started to fill out the blanks with what’s in their heart.  Participants lost their fears and shared their intimate thoughts.  What a relief!  Impacting the whole person is a significant goal in teaching.  Education is a voyage of personal transformation.  And it is through practices like these that we can achieve it.

The day ended with the screening of two films.  Playa Azul I Love You is a short film about the first Plural Wedding of Ecosexual Love in the Caribbean, performed in 2014.  It’s my first and I was very shy when introducing it.  It’s co-direcred and co-produced with Shaison Antony.  It is still incomplete.  But was good enough to show to a supportive audience.  The second films is a classic of Ecosexual cinema, Goodbye Gauley Mountain, by Beth Stephens with Annie Sprinkle. 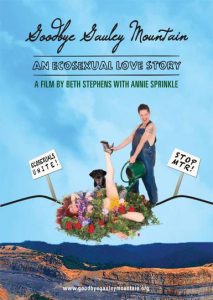 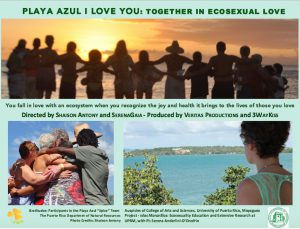 By the time of the screenings, most people in our audience could not stand the cold any longer.  Many braved the adversity and stayed anyway.  But it was a small group.  Some of the feedback I received on my film is that it requires more drama.  Its accented English was amplified by the large screen.  Gauley Mountain is a favorite in my courses and was appreciated here too.  In a future edition, I would place films at a more favorable time in the program.
This is my report on Day One.  I want to thank all the speakers, volunteers, facilitators, organizers, technician, and attendees.  Collaboration was at a very high point, with everyone staying tuned and willing to pitch in.  There was a lot of peripheral vision.  Students enrolled in Huma 4996-001 did a great job of manning their teams, bilingual/hospitality team, attendance team, technical team.  Everyone was very responsible and present.  We met many new people willing to help us power events like this.  My beloved assistant, Paola Pagan, a UPRM alumna, was as appreciated, organized, and attuned as ever.   Thank you Paola!  I was, at times, overwhelmed with trepidation about how all this would pan out.
This big Day One was a big challenge for me.   And I sometimes became bossy and bitchy as a 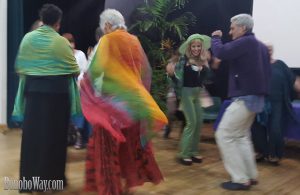 way to fend off tension and cope with things.  I apologize to anyone who might have been in the way.  I’m glad I can think back to this experience with calm and wisdom.  Firsts are a way to gather stronger teams.  And when we do another edition we will have more calibration, delegation, and wisdom.
Thanks for listening.  I hope this was useful.  If you find this report interesting, please share with your networks.  We will post more on Day Two, the in-the-body day, and, eventually, on Day Three, the spice-on-the-beach day.

A Taste of the Book:
Ecosexuality: When Nature Inspires the Arts of Love